Autostrade per l’Italia and its subsidiaries are carrying out a major investment plan to develop and modernize the highway network.
Twitter Facebook Mail Print

Assistance and control activities are carried out along the highway network by over 7.000 people.

Our network is organised in 7 national branches (Direzioni di Tronco),  each of which manages the network in its territory.

More than 7,000 internal and external resources provide traffic assistance and monitoring services. A certified control system and a network of 1500 sensors constantly measure the flow of traffic on the 2,850 km network.

The constant focus of Autostrade per l'Italia on network traffic and immediate interventions to overcome potentially critical issues relating to the flow of traffic, have resulted in less time loss, tailbacks and delays, measured with an indicator known as Total Delay (TD). Total Delay measures the difference between the average travel time detected on a highway stretch in the period in question and the average length of time spent in free-flow conditions at the specific average speed applicable to the stretch. This difference is multiplied by the number of vehicles in transit and gives the total time lost by all motorists travelling on the highway stretch.
The planning process for the traffic flow index and for the collection, processing and dissemination of data achieved ISO 9001 certification in 2007. This certification is still in place and is ISO 9001:2008 compliant. The TD fell 40% between 2006 and 2017. 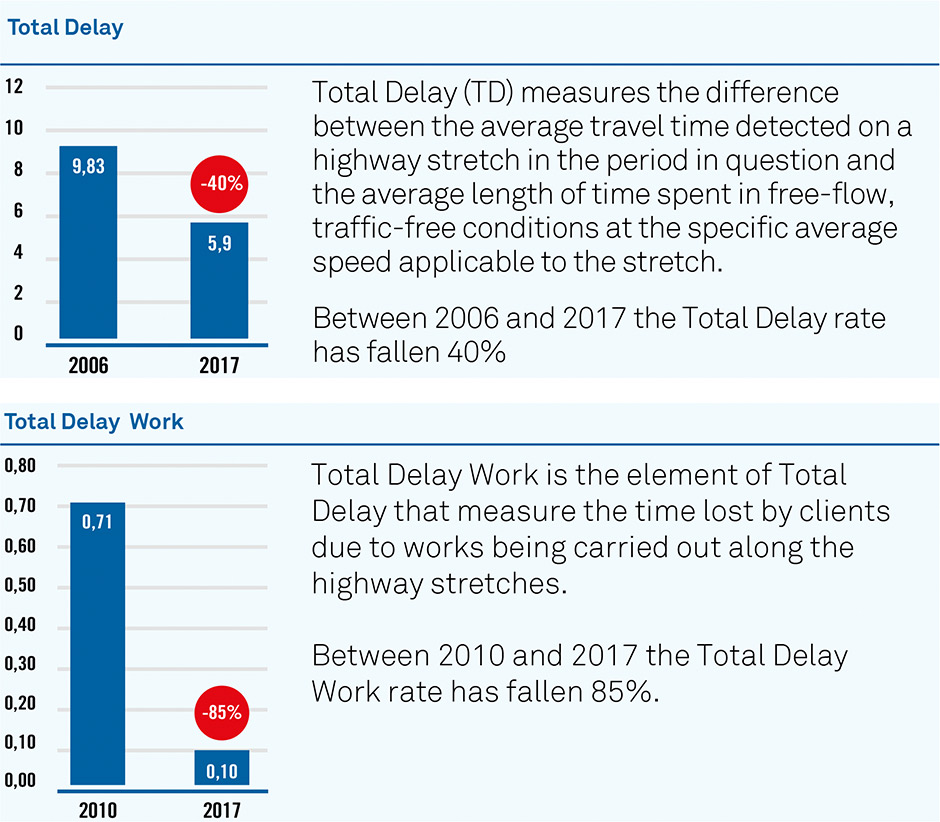 With a view to improving traffic and achieving these important results, Autostrade per l'Italia is committed to the following:

As regards the roadworks that are required in order to implement the network expansion plan, Autostrade per l'Italia shared a specific protocol that envisages works to widen the existing highway lane without reducing the number of lanes, with the main consumer associations.

Maintenance roadworks are essential for motorist safety. There are approximately 220 roadworks every day on our network, most of which for resurfacing works, increasing the rain-resistant asphalt (draining) and installing safety barriers (guard rails and central reservations) and noise barriers. Work is concentrated in those periods of the year with favourable weather conditions (many operations cannot be performed in the event of rain and snow). All interventions, except for unforeseeable emergency situations, are carried out in line with the following operational standards:

Autostrade per l'Italia provided for the installation of additional roadwork signage to the signs envisaged by the Highway Code.

Autostrade per l'Italia has established, together with the Ministries of Infrastructure, of Transport and of The Interior, AISCAT, ANAS and Haulier Associations, a protocol which envisages, as is already the case in the rest of Europe, a temporary restriction on lorries in specifically indicated areas, in the event heavy snow. During snowfall, Autostrade per l'Italia performs traffic management using a complex operating model that involves:

Autostrade per l'Italia operational mechanism was further enhanced in 2011 to allow it to better cope with high intensity weather events of an ongoing nature. All actions undertaken had one aim: that of guaranteeing good conditions on the highway stretches and preventing motorists from being stuck in queues, through correct and timely information.

The main initiatives undertaken were:

There are toll booths every 13 km on average. We are committed to the following objectives:

Toll booth queues have been markedly reduced thanks to these interventions

TE online is a portal for all those with an interest in the transit of Abnormal Loads (i.e. those vehicles and/or loads which, due to their size and/or mass, exceed the limits as set out in the New Highway Code). TE online especially targets industry operators, hauliers and agencies requiring information on the transit of a vehicle or abnormal load on Autostrade per l'Italia stretches, the stretches overseen by its subsidiaries or by other concession holders, and who wish to carry apply for the issue of an abnormal load permit for highway network routes. The portal has two sections: an information section and an application section for the electronic issue of permits; the latter section is available to all firms that have registered for the service. Information and permits can also be requested from the dedicated counters in all Autostrade per l'Italia Direzione di Tronco departments, which are open every day during office hours. The "Planning and delivery of the abnormal load approval service and the relevant monitoring on the highway network" process is quality certified according to the ISO 9001 international standard.